Blow All Blocks Up! -BABU

The game is about defending earth from alien invaders, the evil Blockheads. They send robots which are building long lines of blocks from their spaceships towards earth.

You move around on your 80's 'space skateboard' and destroy these lines of blocks - or even the alien robots if you can catch them.

Please report problems if any occur.

Also please leave your thoughts about the game.

You can use WASD or Arrowkeys or Gamepad arrows (installed version) to move around. Each of your weapons is fired by one of your fire buttons. Same goes for menu.

DESTROY all BLOCKS on screen OR better the ROBOTS when you can get them.

Use BOMBS  to kill lines of blocks above or robots out of reach.

* Progress is shown in mini-Map

* Keyboard or Gamepad (there are so many out there, no guarantee it works with your gamepad)

I am a Linux beginner. So I build a file but I did not manage to start it on my machine. I included the zip file of my build as a downloadable file but I have no clue if that thing will run on your machine.

Same as above, just worse: I do not even own a Mac so I have even less clues if it will work on your machine. I put up the download file as well but please use it on own risk.

Linux: Download the archive and unzip. Only for experienced users, since I could not give any support as a Linux newbie.

Mac: Download the archive and unzip. Only for experienced users, since I could not give any support. I do not even own one. :(

Inetersting game! I found this idea ineresting.  I d prefer call it someway modifed tetris. You call it BABU. Cool!

Played several times. First of all, i dont get the way to play it right. I start to kill all blocks. And looks like, i got situation with empty screen. And from up screen red lasers are trying to shoot me.

Second, looks like, i need not to shoot everuthing. I need to shoot blocks with robots inside. And kill block, then kill robot. This is the right way to play it.

Thank you very much for your detailed feedback, DimaLink!

I now added a how-to-play more close to the game. I hope that will help players in future to play, especially using the bombs wwhich seem not to be easy to notice.

I took an embarrassingly long time to figure out how to use the bombs!  xD

I'm not sure what "L Strg" is on the key board?

Sound effects were great!  Reminded me of the old arcade like DOS games I had when I was a kid.  The graphics are fine the way they are at the moment as well, keeps well with the theme.

The way the aliens move around seemed a bit random to me, I felt like a lot of the time I just had to wait for them to come down.

I like how they build up there base, its almost a reverse tower defense!  :P

Maybe what this game needs is a few more abilities and power ups.

A lot of the time in the later levels i felt like i spent all the time moving and could not get up to shoot back.

If there was a temporary shield power up that you could time to go on the offensive that would of fixed that.

You could make them like Mario kart weapons, you can hold one at a time and "fire" it when you think is best.  That way a player can't hoard them in the early levels.

Thank you for the detailled feedback! Good you had at least some fun playing it. :)

I am currently thinking about, what new features to set up ingame. So some of your suggestions might be implemented. :D

In a month or probably two I will bring out the next update. Hopefully using some of the potential. 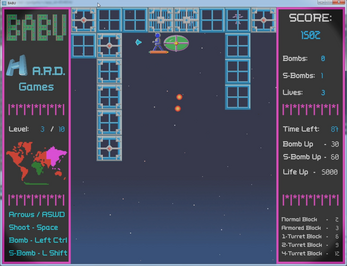 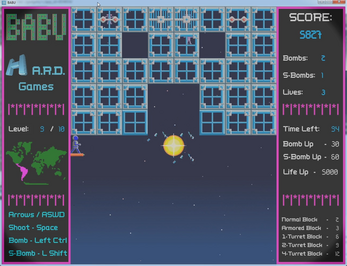 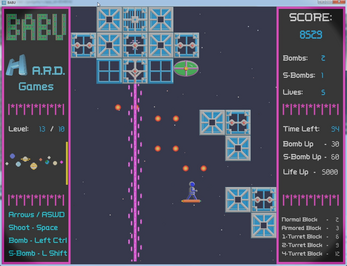